While visiting San Francisco for QCon SF 2008, I had the opportunity to get a tour of Sun’s Campus in Menlo Park from my friend Aaron Houston. Aaron is the Program Coordinator for the Java User Groups (JUGs) has been supportive of the efforts of the Greek JUG (JHUG). He is also an avid supporter of the Java Champions project.

In order to get there I had to take the Caltrain from SF Station to Menlo Park.

At Menlo Park Station Aaron picked me up and we drove up to Sun’s Campus. There I had

the chanch to see where all the JUG magic is being done and also meet Mark Dehart.

I also had a chance to meet with Reginald Hutcherson who is a Java Evangelist that has been regularly visiting us in Athens, Greece with his team. 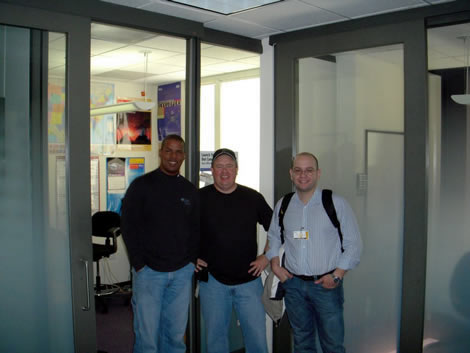 We also visited the office of Doris Chen, one of our beloved Java Evangelists, but she wasn’t there.

After that we walked through various places of the campus, one of which was the exhibition center, AKA Geek Disneyland.

One of the things that also impressed me was the cafeteria that employees had their lunch. Talk about choices! BBQ, Oriental, American, vegetarian and huge selection of bevereges. I could definetly gain (even) more weight here 🙂

As we were going through corridor after corridor, Aaron stuck his head in a door and started to talk to some employee. At some point of the conversation I heard the name “James” and immediately notices the sighn next to the door “James Gosling”. This was actually the pinnacle of my visit there. I had the chance to pay my respect to the father of Java and invite him to visit us in Greece. 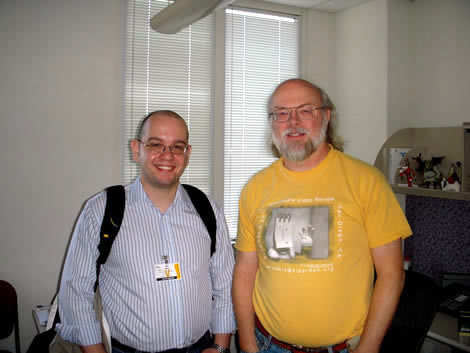 This was actually the pinnacle of my visit there. I had the chance to pay my respect to the father of Java and invite him to visit us in Greece.